Last week, the White House held a reception to celebrate the importance of engineering education to the nation’s future. As part of the group of invitees, I was treated to a convivial gathering of engineering deans, industry leaders, National Science Foundation staff, and administration officials, all discussing the key role that engineering education plays in creating the next generation of American leaders.

The occasion was an exciting one for the deans. In addition to Paul Ottelini, CEO of Intel, we also met Secretary of Energy Steven Chu (a former Berkeley professor and Nobel Prize winner for Physics) and Secretary of Education Arne Duncan.

We also had a very special guest star: President Obama popped into the reception for a surprise appearance. You can watch a short video of the President addressing our group by clicking here. 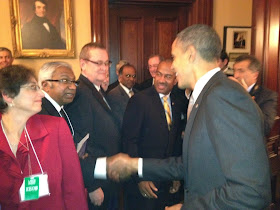 Dean Steinberg (at left, in red) with Arne Duncan (at back, left); Richard Taylor of Intel; Subra Suresh, Director of NSF; Dean Gary May of Georgia Tech; and President Obama.

The president talked about the need for engineers as a key source of technical and management talent, saying that we need 10,000 more like Steve Jobs in this “new world economy.” He talked about how the founders of our country “were tinkerers and doers and believed in the capacity of people to improve themselves through scientific inquiry.”

The President also described the Science Fair at the White House he had just attended. He recounted his conversation with a team of three girls who built prize-worthy rockets and couldn’t afford to make any design errors because they only had enough money for a single test shot. He also described a young man who had designed a marshmallow catapult, which the President seemed to enjoy a lot.

The celebration was sponsored by the President's Council on Jobs and Competitiveness (Jobs Council) led by GE's Jeffrey Immelt. The Jobs Council has pulled together a group of over 70 companies who have pledged to work towards graduating another 10,000 engineering students in the next year. As part of this, the group is sponsoring the Stay With It program, designed to encourage engineering students to stick with their engineering education. LCS will be participating in this innovative program.
Laura Steinberg at 4:55 PM